So, back when I first started rebooting my home campaign setting from a Tentpole Megadungeon generic D&D world that owed a lot to Dwimmermount and into something a little funkier, one of the ideas I hit upon was that the economy would be based on souls. I didn’t really know what that meant, but it seemed cool, so I ran with it. Well, after lots of reading and thinking and coming up with other parts of the world, it finally clicked together into something that makes some (warped, D&D, in-game) sense. To sweeten the deal, I’ve included some awesome art that my co-creator Eric Koch has done so far. 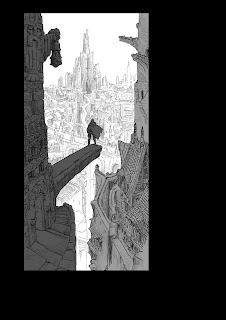 Brief Word on How We Got to Now Far back in dimly remembered times, the Dwarves arose as the first mighty kingdom and took over all the peoples of the lands they could reach. After tens of hundreds of years of dwarven overlordship, nomads of the steppe swept over the empire and made it their own with the help of dark sorcery. These witch kings took on much of the Dwarven culture, liking what they found, but they kept their magical ways, lengthening their lives through many means. After many, many kings, a group of them enacted a ritual to give them unending life - of a sort. The ritual worked, creating the mighty Lich Kings, but so great was their work that it killed the gods. The world turned wrong after that, and eventually the kings and the remnants of their folk had nowhere to run but to a far flung outpost on the edge of the world across the sea - Fellhold. 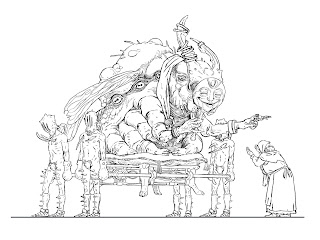 Birth of the Fiends When the gods were murdered, their blood fell to earth - pure, concentrated soulstuff, stronger and more fearsome than anything tied to a mortal body. Where it struck, the dumb things of the world - sticks, rocks, beasts, and birds, and so forth - took on the twisted mockery of a soul. Some tiny and petty, others mighty and awful. So were born the fiends.

The Closing of the Underworld Something in the liches’ ritual or its aftermath closed our world to the underworld, and the souls of the dead were left to wander around this world unseen and unfelt but by those with the power to do so. Fellhold is wholly full of ghosts.

Souls and Soulstuff It is well known that souls are made up of many parts, each its own bit of the whole man or woman. All of these bits are made of soulstuff, the same stuff that godsblood and fiends are made of. Like energy or matter, soulstuff cannot be created or destroyed, but it can change form and state and be moved around. When someone dies, some bits of their soul hang together and become a ghost - others pass on to family or back into the wider world.

When someone dies, they lose their Lyke and their Ond, and most of the time lose their Wode, Hamingja, and Fetch. The Hamingja most times passes to close kin, children if the dead had them. Sometimes the fetch goes along to a child, but more often goes out into the world on its own, and rarely finds its way into fiendhood of its own. The wode most often fades back into the world, to be mixed with that of others and taken up by new life, just as the flesh is in the world we can touch.

Ghosts So, when folks die, they are left with some bit of their Hame, their Hugh, and their Myne. Of these, Myne is far the strongest. Over time, ghosts lose more and more of their Hugh and their Hame, becoming lost, confused, and vague, but their Myne ties them to those things most weighty in their life - often home or kin, but betimes hatred and death. Ghosts sometimes fade together to strengthen the bits that go together - so, your many dead forefathers and foremothers might all fade into a vague set of ancestor spirits. Others are so tied to their homes or other steads that they’ll become a part of the soul of the place - very old and well loved (or hated) buildings have a strong character. 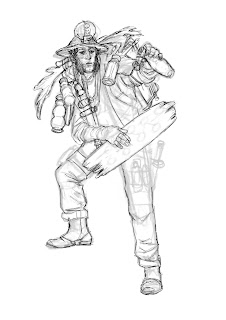 Bottling Ghosts At some time in the past, someone clever came up with a way to put ghosts into bottles. When done well, using the right kind of glass, these bottles stop the bleeding away of a ghost’s soulstuff over time - at least so far as anyone can tell since ghosts have been bottled. So, ghosts who are bottled get to keep their selves, and can come out sometimes, like when the great grandkids come over. The rest of the time it’s awfully lonesome, though. At least unbottled ghosts have each other to see and talk to.

Fiends and Souls The souls of living beings belong to them, fair and square - they take no thought in how readily they call upon the different bits of their soul, nor even feel any difference between them. For fiends it is otherwise. Fiends are squatters on their own souls, and their soulstuff comes from the dead mess of the godsblood. Some started with more, others less, but all hunger and thirst for as much soulstuff as they can get - always more. Soulstuff, though, cannot be eaten, drunk, or taken - only given or lost. Over the years, fiends have tried many ways to get what they yearn for, some combing the unseen world for the leavings of fled Wode or Ond, others eating the flesh of the dead, until they found something truly deep: they gain the same strength from owning a soul as from taking it into their own soulstuff. 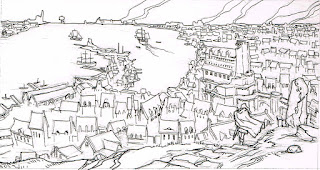 The Rise of Soul Banks Some fiends took note of the bottling of ghosts and the lore of soul ownership and thought up something truly clever. They saw that they could own bottled souls and get everything they wanted. Overtime, further cleverness came about: learning that holding a loan as collateral counts as “owning”, that the bits of the soul could be bottled on their own, and that ownership can be shared without breaking up the soul - only the shares of ownership. And so what started as piles of ghost bottles squirreled away in dark holes grew into great shared vaults, which grew into huge joint stock businesses that now back all of the ebb and flow of commerce in the great city.

A Quick Word on Worship and Magic Worship and Magic both involve efforts of the Hugh, though magic also needs to draw on the Hamingja. Worshipping and making magic create a kind of energy from these bits of the soul - not pulling away the actual substance, but made by it, like heat or sound coming from a place of friction. Such “heat and sound” can then pass energy into other soulstuff, strengthening it without enlarging it. So some fiends seek out the worship of living beings, and others make deals with mighty wizards as other ways to gain strength beyond owning souls. 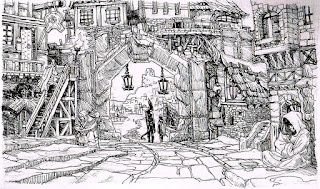 Selling Your Soul All of this means that the folk of Fellhold have many ways they can “sell their soul”, whether they want to set up a will to be bottled and kept safe upon their natural death, or if they reckon they don’t need their Luck as much as they need to make this month’s rent, all the way up to signing on to a stint as a draug thrall, bottling their soul in the meantime and loaning out their Lyke, Hame, and Ond to work for others. 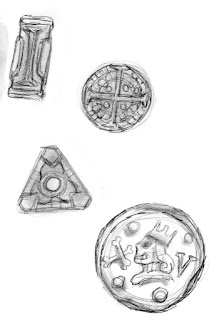 So, when you put all of this together, you have a thing that is very worthwhile to some and somewhat worthwhile to everyone (bottled souls), that takes a fairly fixed amount of work to make (a life). You can’t spend that thing day to day, however, so you need something else. Over time, the banks took over from the Witch Kings in minting coins, each a token worth some tiny bit of a one of the souls in their vault. If you truly wished, you could take a pile of coins, go into your bank, and walk out with bottled ghosts, maybe to seek a better payout at a neighboring bank - but day to day, almost no one does this. So souls work the way that gold used to work for bank notes and pre-fiat currencies in our own world - the underlying asset that the money gets its worth from.